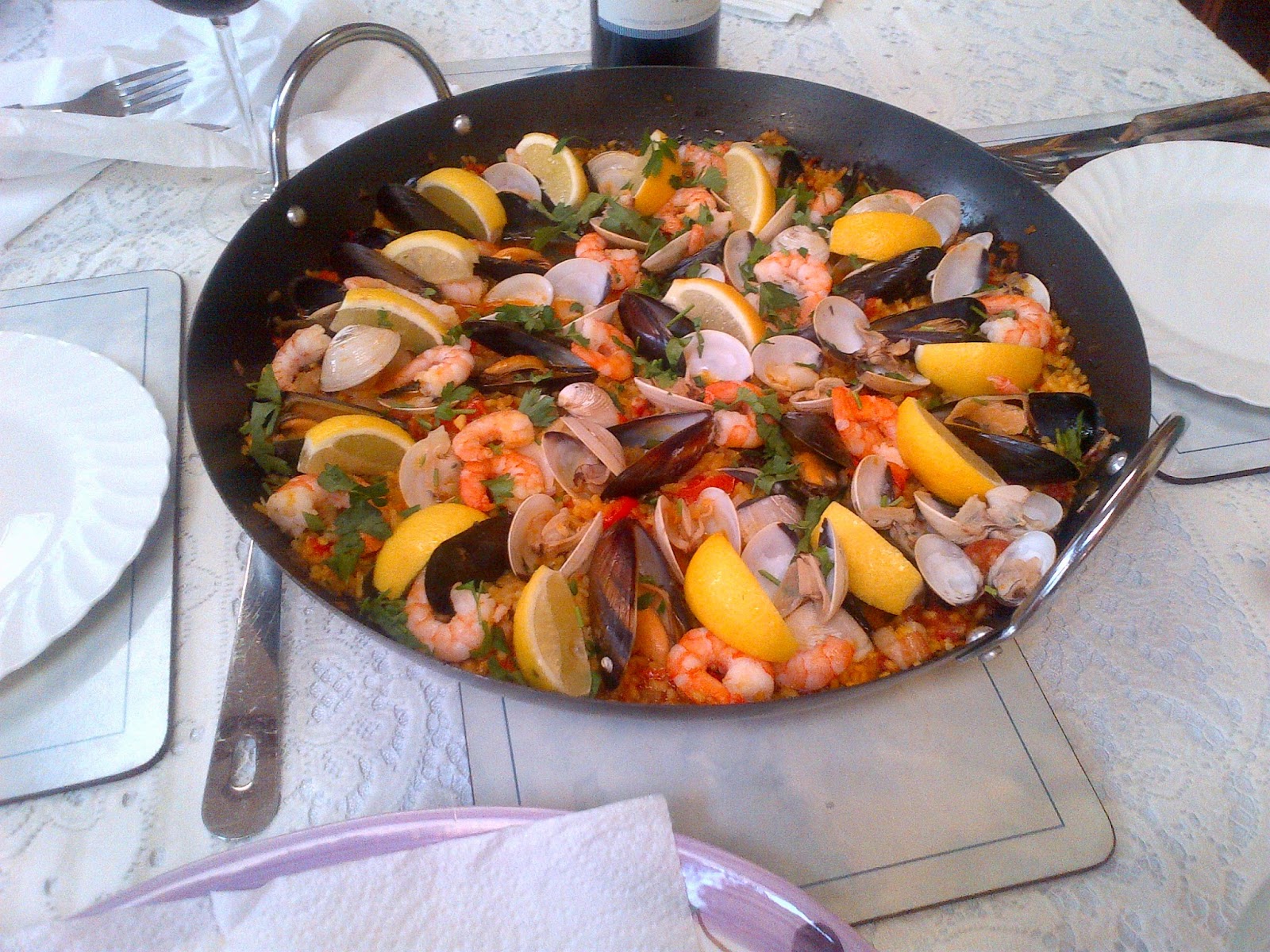 When I first tasted Paella  I really didn't like it, primarily, because I wasn't fussy on Mussels, however, many years ago we had a wonderful holiday in Nerja on The Costa del Sol, Spain.
It was the first time Ian and I had a foreign holiday together, complete with three daughters in tow, consisting of two stroppy teenagers, aged 14 and 13 and youngest daughter aged eight.
This was when we'd been 'a courting' for two years and three years before we finally married.
It crossed my mind at the time, maybe he was using this holiday a sounding board before he eventually popped the question !
The holiday was a resounding success.
We stayed in a small family  hotel, managed by the owners, Margarita and Pablo,
They had two lovely handsome sons  aged sixteen
and fifteen, their names were Pepi and Juan.,
The two boys were a great hit with the two stroppy teenagers, they spent a lot of time chatting and laughing around the pool. By magic the stroppiness disappeared  and the two elder Princesses returned to their sweet little selves.
Perfect peace ruled the day.
Just down a very steep road from the hotel was a gorgeous beach with soft white sand and huge swaying Palm Trees, the sea was as blue as blue can be,
Most days we tootled down to the beach and later to be joined by the two boys from the hotel, this would only be after they had performed their daily assigned tasks.
There were quite a few Beach cafes all touting their particular daily specialities,
One place that stood out was a café where they served, according to the ad's round and about, the best  Paella in Spain, although, I expressed earlier, I was reluctant to try the much loved Spanish delicacy!
.Eventually I caved in as I ingested the delicious
aroma, wafting over from the café where the Paella simmered gently, in what can only be described as the largest Paella Pan in the world.
The owner/chef at the café is quite  famous for his culinary skills and has featured on many travel shows in the UK and Europe,(If you google Burriana Beach) there are loads of interesting  articles, including the famous beach café called The De Ayo where you can
you can learn of the wonderful experience that we had.
Enough to say that I thoroughly enjoyed my first authentic Paella.
The picture below is a Paella I cooked recently for my brother Clive and sister in law Marilyn  when they came around for one of our 'soire's', recently.
My thanks to Denise, the epitome of perfection for devising ABCW and to Roger the administrator, who's  profound pondering keeps us all away from pretentious prose to the point of perfection !.
...I'm signing out now as I've run out of PPPPP's  !
Di's Delicious PAELLA