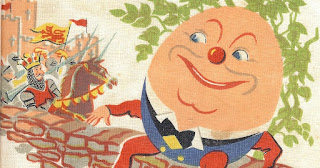 Humpty Dumpy had a great fall, 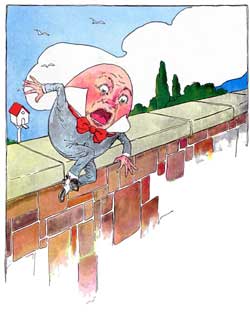 Is really a character and literary allusion,

He has appeared,  or been referred to  in many works, including Lewis Carroll's 'Through the Looking Glass'.

He is typically portrayed as an 'anthropomorphic' egg.

In 1996 the Colchester Tourist  Board's website revealed, after years of research that  HUMPTY DUMPTY  was in fact a giant cannon which was colloquially known as HUMPTY DUMPTY.

Colchester was a walled town with a castle and several churches and was protected by a city wall.

HUMPTY DUMPTY  (the giant cannon) was strategically placed on the wall to protect the town from the enemy. However a shot from a Parliamentary cannon succeeded in damaging the wall beneath HUMPTY DUMPTY,  causing the cannon to tumble to the ground.

The Royalists or Cavaliers ("All the King's Men") couldn't put HUMPTY together again.

The story goes that attempts to raise the giant cannon again proved impossible.

I love horses and all that is involved in the Equine world.

I have been sitting in my favourite reclining chair just wracking my brains for a suitable subject, then...... Lo and behold.... Before my very eyes....on TV the coverage of the Equestrian Events in the 2016 Olympics Games.......Inspiration at last!

Horses have been used through the ages for many purposes. When I was a child we used to have our freshly baked bread delivered daily by a large covered cart drawn by a huge shire horse called Bob we used to give him a large juicy apple off one of our Grandpa's trees. When the Cart horse had finished his deliveries Grandpa would diligently follow in the horse's big clodding shoe steps and shovel the loads of steaming horse manure into a bucket, he then would spread it around the garden on his various fruit and vegetable plants and particularly on his prize winning rhubarb. Needless to say my brother and I would not eat the lovely rhubarb pies our granny used to produce.