M stands for The Mr Men and Little Miss's stories.

Roger Hargreaves author and illustrator of The Mister Men and Little Miss stories. (1935-1988). Roger worked as an advertising copy-writer. He died unexpectedly, after a series of strokes. His son Adam, said of him, "Dad had always been this huge man in every way, he was 6ft 5' and he always seemed larger - than - life and healthy". Adam recalls, when he was aged 8, that one day, whilst playing at the breakfast table with his Father, he asked him, "Dad what does a tickle look like, my dad looked at me and laughed, he then went away and drew a yellowy-orange man with long arms, sketched in an appealingly bold style, in basic colour---------- Mr Tickle was born. 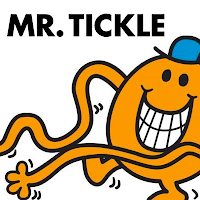 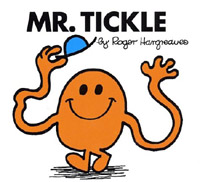 Mr Tickle was walking along looking for anybody to tickle, eventually he came to a school, he peeped into a classroom; there were children sitting at their desks and a teacher writing on a blackboard.

Mr Tickle's extraordinary long arm went right up to the teacher, paused, and then- tickled! The teacher jumped in the air and turned round very quickly to see who was there. But there was nobody there! Tickle kept on tickling until the teacher was laughing out loud.

All the children were laughing too at such a funny sight. There was a terrible pandemonium.

Eventually Mr Tickle thought he'd had enough fun, so he gave the teacher one more tickle for luck, and then, very quietly brought his arm back through the open window, leaving the poor teacher to explain what that was all about!

Mr Tickle became the first character in what would be the stratospherically Mr Men and Little Miss series. " 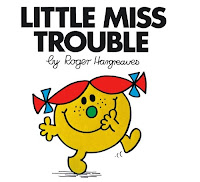 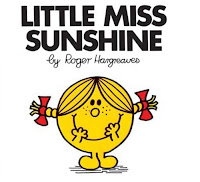 It was the day that changed our lives", says Adam, age 48,  Roger Hargreaves's  son.  Adam is also a painter and cartoonist. It was 1971 and Roger was trying to find a way to escape his daily commute into London to work. Then Adam helped change all that by asking a quirky question about tickles!

His father went on to write some 46 Mr Men and 33Little Miss books, which illustrated a simple humorous tale about the trait in each character's name. They were pocket size and originally 15p, Each was an instant collectible and made Hargreaves the UK's best selling author after J. K. Rowling and Dan Brown. Sales exceeded more than 85 million copies worldwide. The stories have been made into animated movies, achieving worldwide acclaim. All thanks to a young boy asking 'that question' !

I intended to write about one of the LITTLE MISS books but ran out of time... maybe another day!
My sincere thanks to the MARVELLOUS Denise for devising ABCW and the equally METICULOUS Roger for keeping us all MESMERISED in our search for a suitable subject to write about. Not forgetting the team of helpers too!
Cheers Di. .ABCW team.

Email ThisBlogThis!Share to TwitterShare to FacebookShare to Pinterest
Labels: tickled