When we have our traditional Sunday Roast Beef it is always served with Yorkshire Pudding. 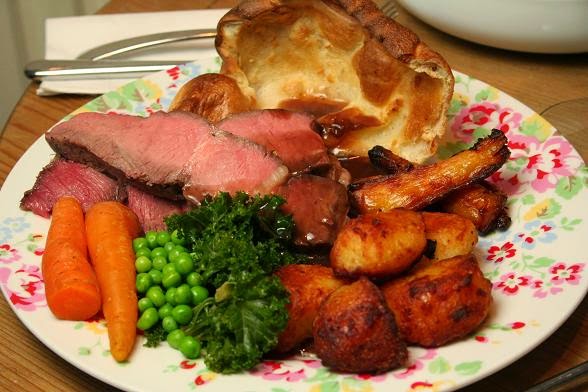 You will see the slice of Yorkshire Pudding nestling on the back of the plate with a good lashing of rich brown beef gravy drizzled over it.


The Yorkshire Pudding is a mixture of at least three large free range eggs , plain flour, milk and water and ground black pepper. I whizz all this together in my food processer then pour it into a hot baking dish which has a good chunk of sizzling hot beef dripping lining it.

It is then placed in a hot oven for twenty minutes, then another twenty to twenty five minutes on a medium heat.

﻿
Individual  Yorkshire Puddings are very popular too but I prefer to make one large one and cut it into portions as it has more flavour. I'm pretty certain our dear Denise Nesbitt will agree with me, being a Yorkshire lass, through and through !

Yorkshire is known as 'God's Own County', not without good reason too!
We have had many wonderful holidays in the UK  and amongst our favourite places is The North Yorkshire Moors. 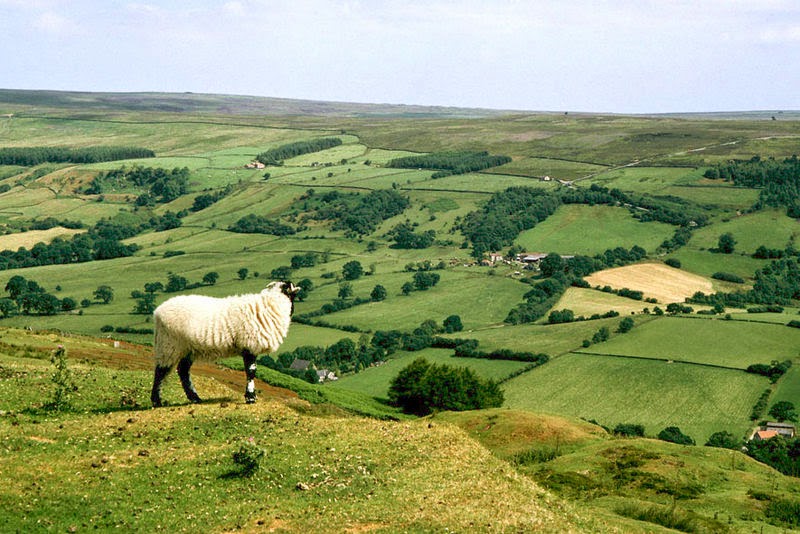 This is why we love The North Yorkshire Moors.....'God's Own County', indeed!

Yorkshire also has some lovely seaside towns, another favourite place to visit is Whitby and it's pretty harbour and it's famous fish and chip shops and cafes. 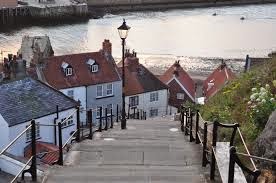 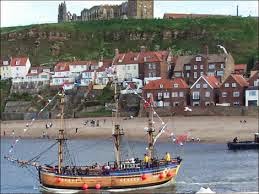 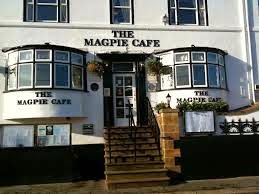 This is the famous Magpie Café that boasts the finest fish and chips in the UK. I can endorse that, we had a memorable supper there.

Would you believe that we had a traditional first course of  a traditional Yorkshire Pudding, smothered in a scrummy onion gravy?

Fortunately we were allowed a suitable break before the next course arrived! What followed was a feast to behold!

We were served the most delicious North Sea Cod, coated in a crunchy  golden batter, The cod was succulent and chunky with a fresh flavour of the sea, we were  looking at whilst we ate. The chips were crispy on the outside and soft and fluffy inside, just perfect...all washed down with a steaming hot pot of Yorkshire tea...... One of the many reasons why we love YORKSHIRE...

Denise is truly blessed to live in such a wonderful place...She does talk of going for a tootle over the moors to Whitby for fish and chips, I'm not sure where she gets hers from, probably a special place just for locals!

My sincere thanks to the ever Youthful Denise for devising ABCW and the  equally Youthful Roger for keeping us all on our toes !e moors

Email ThisBlogThis!Share to TwitterShare to FacebookShare to Pinterest
Labels: God's own County !

Xmas really stands for Christmas, howeverA lot of dedicated Christians object to the  most celebrated occasion in the Christian  calendar being called Xmas, the time when the dear saviour, baby Jesus was born. 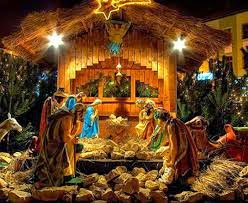 I am a Christian but don't object to the celebration being referred to as Xmas. Many non Christians celebrate the festival and as they don't recognise Jesus Christ as the son of God I think that's how the X crept into the wording of such a significant festival in the Christian calendar.

Yesterday I watched yet another film about Christmas called Scrooge  based on my favourite story written by Charles Dickens. 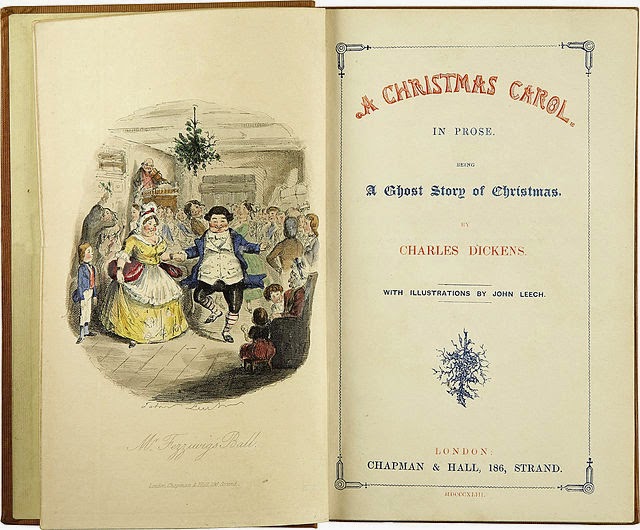 As I have already written about Dickens in a previous post I shall say no more other than, Christmas wouldn't be Christmas without my favourite story.

Many cynics believe that the X substituted Christ in the word Christmas as a snub to Christians so they could still enjoy the festive season without recognising Christ. 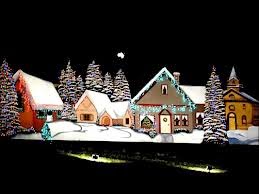 I can remember going to church one Christmas with my brother Clive and the snow was falling heavily, we thought it was magical.

Our father was sent out to bring us home from church as about a foot of snow had fallen and it was still snowing  hard. 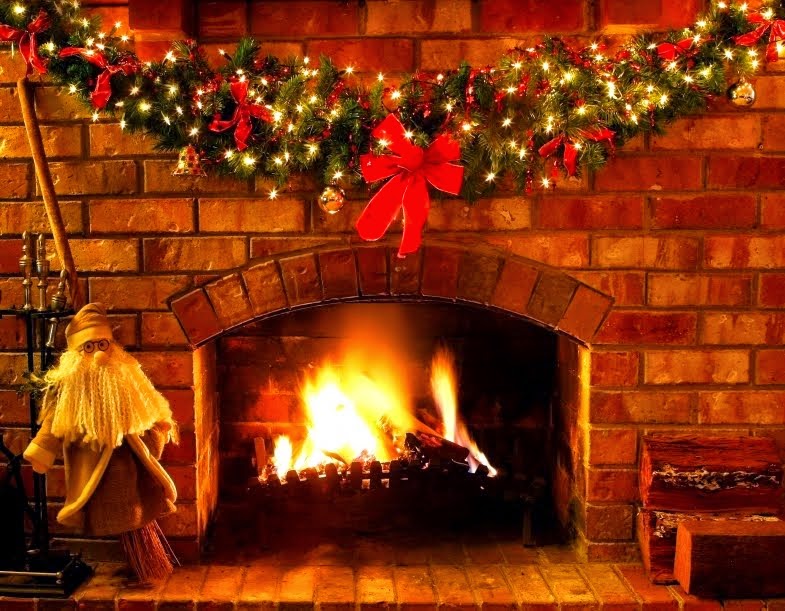 When we eventually got home to a very worried mother, we were greeted by a roaring fire and mugs of steaming hot chocolate.

It snowed relentlessly overnight, I believe we had  about three foot or more, to face the next day. 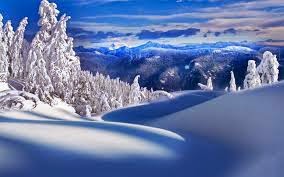 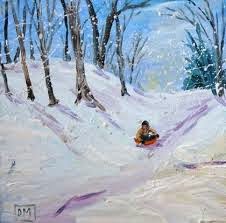 Out came the toboggan and off we went to the red hills to enjoy the XMAS wonderland!

and God Bless us one and all.

My thanks to the extraordinary Denise for devising ABCW and the axiomatic Roger for his diligence in administrating ABCW. 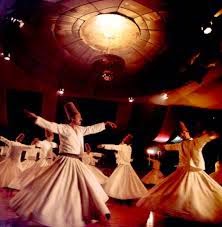 The Whirling Dervishes of Konya. 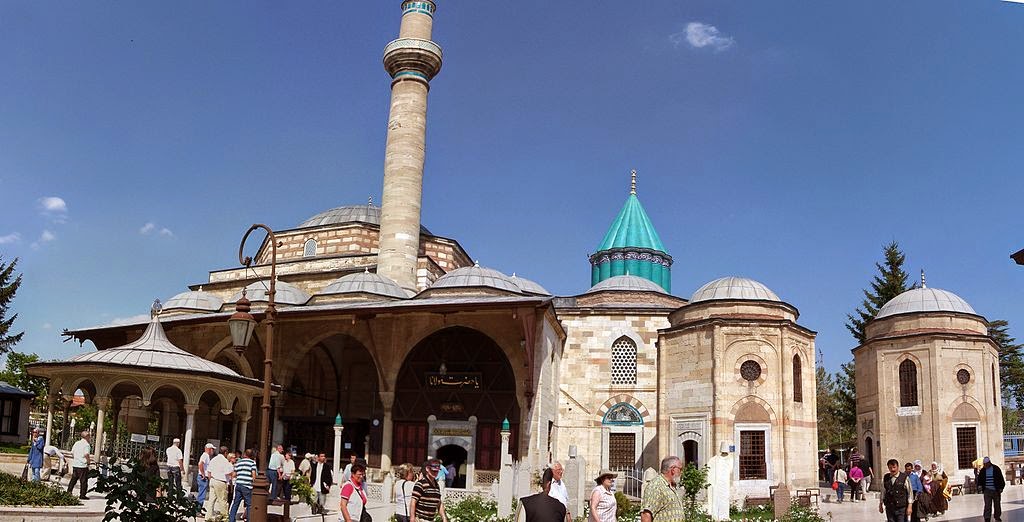 Konya is the spiritual home of Meulevi, (Whirling Dervishes)  a Sufi order of holy men,  founded in this sacred city. Konya  was formerly the capital of ancient Anatolia a region in southern Turkey. 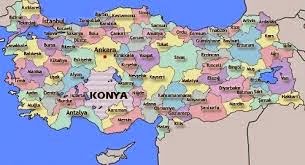 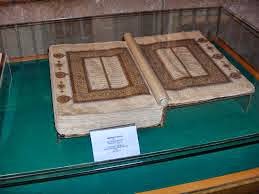 This the smallest hand written Koran in the world which is housed in the museum.

The museum is also a mosque and mausoleum  There are several tombs of Sultans and important holy men, including Jalalad Din Muhammad Balki-Rumi a thirteen century Persian Sufi mystic. He was a poet, Islamic jurist and theologian.  He was also  known as  Meulana or Sifi. 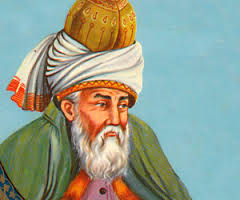 His most devout followers were the Whirling Dervishes, known as such, due to their famous practice of whirling as a form of Dhikr  (Remembrance of God). 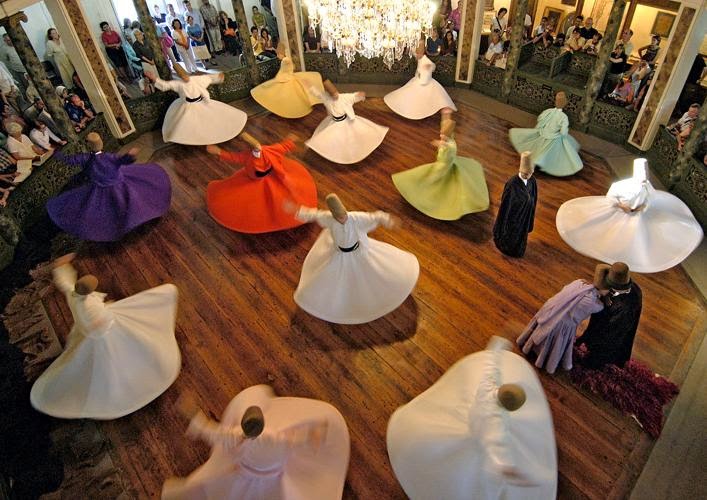 We have had many wonderful holidays in Turkey and I can't fault any of them.... Each one a different place and a new experience!

The Turkish people are a most welcoming nation known for their  and hospitality.  Their cuisine is divine, we've had so many memorable meals  it would take some time to tell you about them !

Here is one of my favourite dishes, it is called Iman Bayildi. 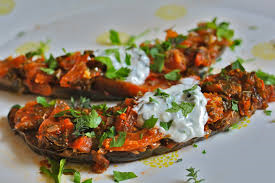 The yarn behind it is that a Sultan liked it so much that fainted in rapturous delight.

To see the Whirling Dervishes perform live in their spiritual home was a most wonderful, wholesome uplifting experience, something we shall never forget..... truly WONDROUS !

My sincere thanks to the winsome  Denise for devising ABCW and to the ever watchful Roger who works so hard in keeping us all on our toes!
at December 16, 2014 22 comments:

Email ThisBlogThis!Share to TwitterShare to FacebookShare to Pinterest
Labels: A great honour and wonderful experience..

Another poem by one of my favourite writers H.W.Longfellow.

Nothing heard he but the praises

Of Badoura on his way 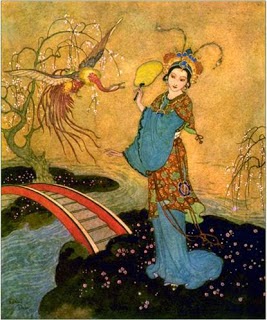 But the lessening rumour ended

When he came to Khaledan;

There the folks were talking only


So it happens with the poets, 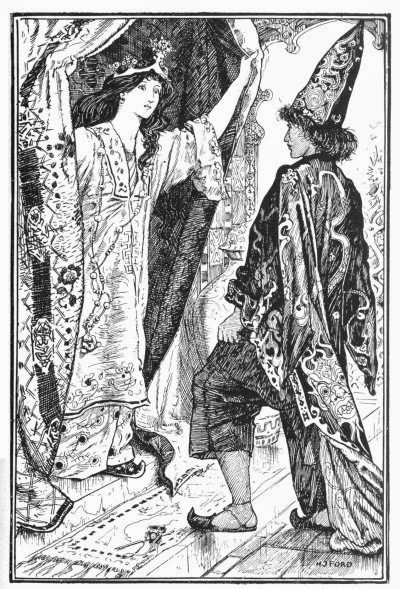 Every province has it's own;

Where Badoura is unknown.

I'm not really familiar with this poem but feel it has some connection with The Tales from The Arabian Nights. I've searched Very hard to find out what was in Longfellow's mind when he wrote this? To no avail.
Perhaps the message is in the final verse where he goes on to say.....


So it happens with the poets,

Every province has it's own;

Where Badoura is unknown.

My sincere thanks to the vivacious Denise for her vision in devising ABCW and also to the veritable Roger for his hard work as the administrator of ABCW.

Email ThisBlogThis!Share to TwitterShare to FacebookShare to Pinterest
Labels: Voice of the people.

U stands for Under,

UNDER the spreading chestnut tree 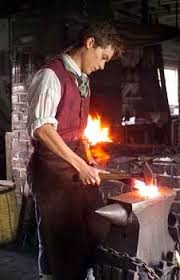 The village smithy stands;
The smith a mighty man is he,
With large and sinewy hands;
And the muscles of his brawny arms
Are strong as iron bands

His hair is crisp and black and long
His face is like the tan;
His brow is wet with honest sweat,
He earns whate'er he can
And looks the whole world in the face,
For he owes not any man.

Week in week out, from morn till night,
You can hear his bellows blow;
You can hear him swing his heavy sledge
With measured beat and slow
Like a sexton  ringing the village bell,
When the evening sun is low.

And children coming home from school,
Look in at the open door,
They love to see the flaming forge,
And hear the bellows roar,
And watch the burning sparks that fly
Like chaff from a threshing floors. 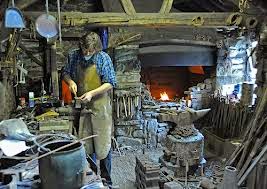 He goes on Sunday to the church,
And sits among his boys;
He hears the parson pray and preach,
He hears his daughter's voice,
Singing in the village choir,
And it makes his heart rejoice,

It sounds to him like her mother's voice,
Singing in Paradise
He needs must think of her once more,
How in the grave she lies;
And with his hard, rough hands he wipes
A tear out of his eye.

Toiling-rejoicing-sorrowing,
On through life he goes;
Each morning sees some task begin,
Each evening sees it close; 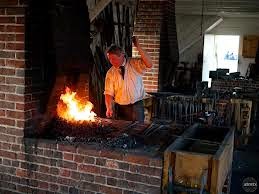 Something attempted, something done,
Has earned a night's repose.

Thanks, thanks to me my worthy friend,
For the lessons thou hast taught!
Thus at the flaming forge of life
Our fortunes must be wrought;
Thus on its sounding anvil shaped
Each burning deed and thought!

This is one of my favourite poems by H.W. Longfellow, a renown American poet, writer translator etc. He was  a man of many talents, and translated several of the classics from Latin into English including some of Dante`s works,
He had a lot of sadness in his life including, losing his first wife after a miscarriage.
He married again to Frances Appleton and was blissfully happy, they  had several children sadly, one of them died at an early age, this left him bereft.
Then, even more tragedy struck, His wife Fanny accidentally set fire to her dress with a lit match, HWL tried to save her and was badly burned too.
She lived another day but just passed away in her bed.
You can read a lot of his sorrow in his poetry, it's almost as if he could foresee the future.
This, I feel,  reflects in the poem and song, known to me from childhood,' UNDERNEATH The Spreading Chestnut Tree' .
It has been rather difficult to use the letter U, just by reading the poem above I was amazed that there was only one word beginning with it, being UNDER!

My thanks to the UBIQUITOUS, dear, Mrs Nesbitt, Denise for devising ABCW and Roger for being a wise and fair UMPIRE of the series.